Lots of people wonder whether ice skating is dangerous because it looks like a sport that is risky, thrilling but also a bit on the scary side. Is Ice skating dangerous though?

The truth is, ice skating is actually not dangerous at all. In fact, it is surprisingly a safer sport than many others including gymnastics, road biking and horse riding.

Although of course accidents on ice happen and not infrequently, serious injuries are less common and many accidents are a result of inexperience or poor equipment.

In this article we will talk you through the most common injuries that ice skaters sustain plus tips for staying safe on the ice.

We’ll also look at some of the most famous ice skating accidents in history. 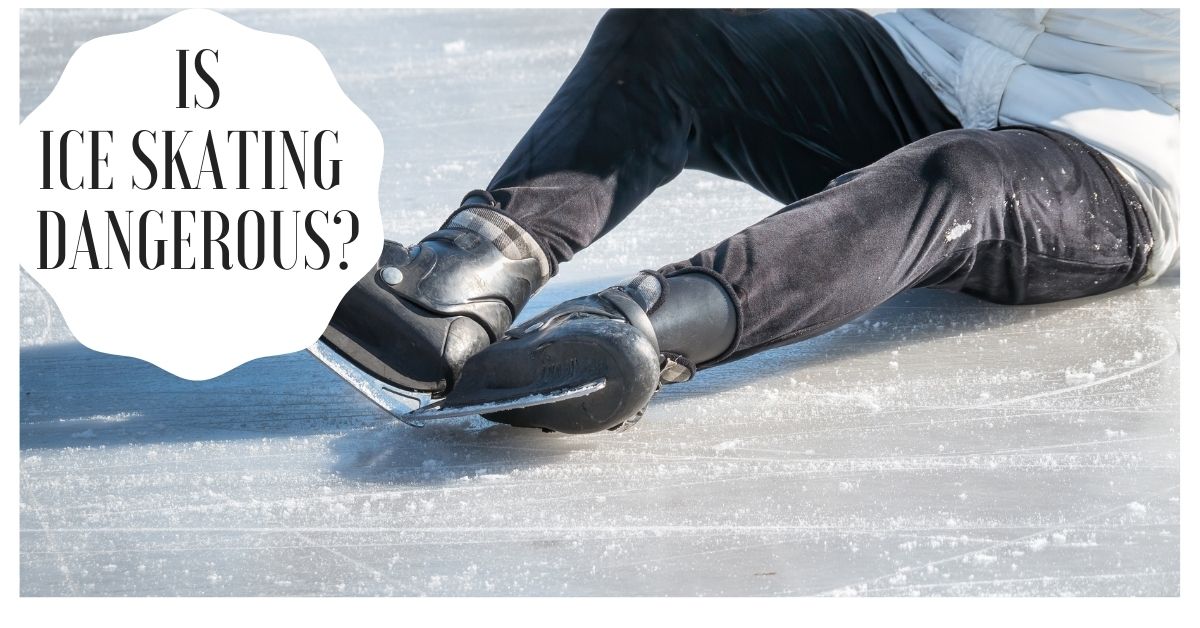 Where Is Ice Skating Most Popular In The World?

First, let’s look at the facts. Whether we are talking about recreational, figure skating or hockey, ice skating injuries, however minor, are common.

According to the Rothman Institute  in Philadelphia,  there were about 50,000 ice skating related injuries in the USA in 2015.  While most of those injuries were minor, it does illustrate how dangerous skating can be, especially for the inexperienced.

What are the most common ice skating injuries?

The top injuries that are treated by chiropractors, orthopedic surgeons and emergency departments are:

You might think that is a really weird injury to sustain while ice skating but many people hurt their wrists or even arms when they try to break a fall.

As most people don’t wear wrist protectors when they ice skate, an outstretched hand can suffer injuries due to impact.

Not only elite skaters who perform jumps and spins risk ankle injuries. Any recreational skater can hurt their ankle especially if their skates are tied too loose. Good quality skates with good ankle support are essential for protecting yourself from these kinds of injuries.

Any kind of fall can cause a concussion and ice skating pretty much guarantees that you will hit your head on hard ice if you fall badly. While experienced skaters often go without a helmet in order to gain speed and height, newer skaters should make sure to wear a well-fitting helmet to protect themselves from head injuries.

This kind of injury is actually rarer than you might think but yes blades can cut, especially when they come at your body with speed during a collision. Make sure to wear appropriate clothing when skating and keep yourself covered as much as possible.

Can Ice Skating Blades Cut You?

A lot of people are nervous about this because we hear horror stories about people who fall on the ice and then get their hands run over.

While a sharpened  skate blade would cause a cut to skin, chopping off fingers is much less common than people are lead to believe.

The danger to your fingers if they are on the ice is not necessarily because the blades are sharp but because of  body weight over the blades. You can press on your blades with your hands and they won’t get cut but if someone skates who weighs 250lbs skates over your fingers, that’s a difference story.

To protect your hands on the ice, wear gloves and if you do fall, get up as quickly as possible. Similarly, don’t wear open toed shoes such as flip flops near people who are wearing ice skates at a rink.

How To Stay Safe While Ice Skating

Now you know that, yes, ice skating accidents can happen, how do you prevent injuries? Let’s look at some ice skating best practices that will keep you safe while you enjoy the beautiful sport of ice skating.

Skating outdoors is romantic, beautiful and skating as nature intended but it can be dangerous. Thin ice on ponds or rivers is extremely unsafe and every year there are drowning incidents when people got on ice that was not suitable for skating.

According to the Canadian Red Cross, you should only skate on ice that is 20+ cm thick. Be very careful around frozen rivers and large bodies of water and never let children out on a frozen lake unless you are sure it is frozen.

A lot of skating injuries can be prevented or lessoned by wearing the right clothing and safety gear. These can include thick gloves and a hockey helmet.

One study out of the UK showed that wrist protectors like these ones normally worn for skate boarding can help to prevent injuries called by outstretching your hand when you fall.

Many rinks will rent out helmets for free but you can also buy them for under $100.

The most popular brand of helmet is CCM. You will see that hockey helmets come with a cage – I recommend children keep these one when they are learning to skate but most adults learn to skate without it.

Who should wear a skating helmet?

Really everyone should be wearing a helmet but especially all children under the age of 12, no matter their skating level and adult beginners should all have a helmet on when skating.

If you head to a busy public rink, one way to stay safe is to follow the rules. Normally everyone should be skating in the same direction and looking out for other skaters.

Don’t race or do tricks and if you are nervous stay close to the sides.

I liken skating in a public rink to driving a car, skate defensively and don’t cut other skaters off. Also don’t assume other people know how to stop or skate well.

We’re already spoken about protective gear but in order to avoid injuries, you also need to make sure you are wearing the right clothing. I’ve written before about what to wear ice skating. The real key to getting dressed for the rink is to wear clothes that cover your skin and keep you warm.

Long pants, a cozy sweater and gloves are a must.

Put Your Skates On Properly

If your skates are tied too loose, they can cause ankle problems because your ankles will start to dip inwards as you skate.

The key to skates that are on well is to tie them tighter than you probably think they need to be. I was shocked the first time my skaters were tied properly. Adults normally have to help children tie their skates in order to get them tight enough.

Here is a video from Skate USA on how to tie your skates properly:

What Are The Worst Ice Skating Injuries?

Although most recreational skaters won’t suffer an injury when they skate for fun, serious injuries can occur.

As you’ll see below, most injuries occur during pairs skating when there are dangerous throws, lifts and jumps done in tandem.

Here are some of the most well-known:

At the Four Continents Championship in 2007, Davison’s blade hit Dube in the face while they were performing a side-by-side camel spin. She required 83 stitches to repair the cut.

During the 2022 World Figure Skating Championships, Ashley fell hard against the ice and has to go to hospital for an evaluation. This American skater has already suffered a concession caused by a fall in a previous season.

Back in the 2006 Olympics, Zhang and Zhang  attempted to land a quadruple salchow jump in competition.  It didn’t end well and was very scary for spectators but the pair were able to get back up and continue skating afterwards.

In the 1994 Olympics, Mandy had a hard fall and and ended up needing 3 stitches to her face. The quality of the ice was blamed for this injury as Mandy snagged her skate into a hole in the ice.

Is Ice Skating The Most Dangerous Winter Sport?

Although you would be forgiven for thinking ice skating is more dangerous than every other winter sport, that dubious award goes to skiing. The Olympic winter sport with the most injuries in 2022 was luge.

This is the feet first sport where you careen down a mountain with no way to steer or stop yourself. No wonder it is dangerous!

The truth is, ice skating can be dangerous if you’re not careful. Make sure to always stay aware of your surroundings, and never skate on ice that is too thin.

Beginners should make sure to wear special equipment to protect themselves from injuries when skating. Another tip is to learn to fall properly. The reason elite skaters don’t get hurt when they practice jumps and lifts is because they know how to fall to avoid injury.

Skating can be dangerous but it doesn’t have to be. Take precautions, stay safe and have fun on the ice!