Ice skating has come a long way since it was first invented in the 1800s. The variety of types of ice skating today is amazing, and there’s something for everyone to enjoy. From traditional figure skating to speed skating, there’s a style for everyone to try.

Ice skating is a great way to get exercise and have fun. There are many different types of ice skating, so you can find the right one for you. Figure skating is the most popular type, but there are also speed skating, inline skating, and mixed-doubles skating. 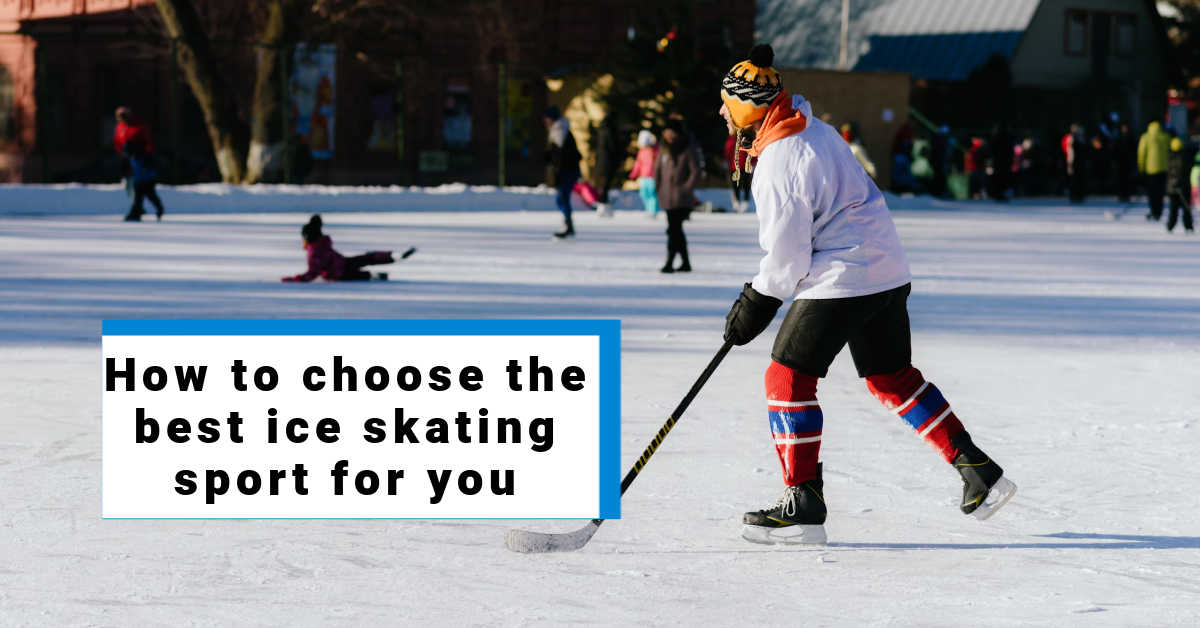 Is Ice Skating A Sport?

Although people wonder if ice skating is a sport, the truth is, it can be broken down into different ice sport disciplines. From the Olympic sports we all know like hockey and speed skating to the lesser known ice skating sports such as curling and synchronized skating.

Ice skating is a sport that has been around for centuries. It can be done in many different ways, and there are many different types of ice skating sports that have evolved through the years.

If you are thinking about getting into an ice skating sport, you will probably want to take some lessons first (here are some ice skating tips for beginners), and then yon choose the sport that interests you the most!

Here are the main types of ice skating:

Other sports that take place on the ice but don’t involve skates:

Let’s take an in depth look at each ice skating sport: 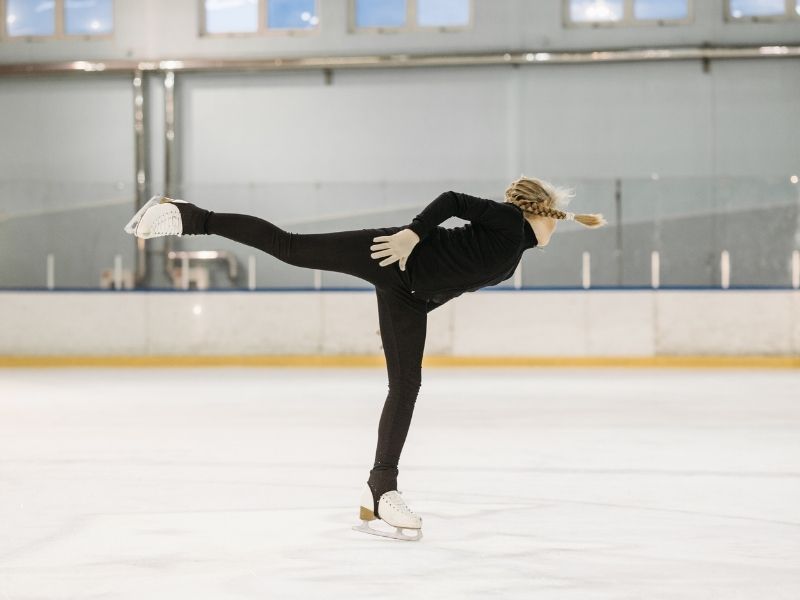 There is something undeniably captivating about figure skating. It is a sport that is both graceful and challenging. Skaters must have tremendous strength and agility to perform the intricate moves that make up a routine. While figure skating may appear to be a simple sport, it is actually quite complex.

Skaters must develop a strong foundation in basic skating skills before they can begin to learn more advanced maneuvers. They must also be able to execute difficult jumps and spins with precision and control. In order to win competitions, skaters must combine speed, power, and grace into a single performance.

Figure skating is an exciting sport that requires skill, athleticism, and artistry. It is a challenging discipline that tests the limits of human ability. Skaters must be determined and dedicated if they want to achieve success in this sport.

Is figure skating an Olympic sport?

Ice skating is an Olympic sport and skaters can participate in singles or pairs.

Most ice skaters wear a costume (dress or unitard for women and pants and a shirt for men). Figure skates have a toe pick at the end to help skaters propel themselves into the air during jumps.

What is Pairs Figure skating? 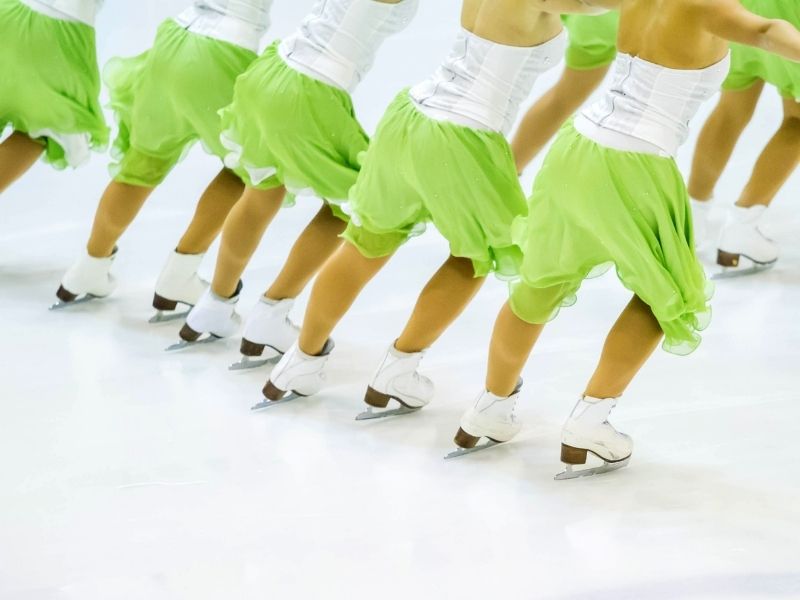 Synchronized skating is a sport in which teams of eight to twenty skaters perform routines together in harmony. Skaters are often strong figure skaters who love the team aspect of synchro.

Synchronized skating is a challenging sport that requires great teamwork, precision, and timing. Until the mid-2000s it was known as Precision skating.

Although there are lifts and some jumps in synchronized skating, for the most part, more important is given to footwork and unity than breathtaking moves. 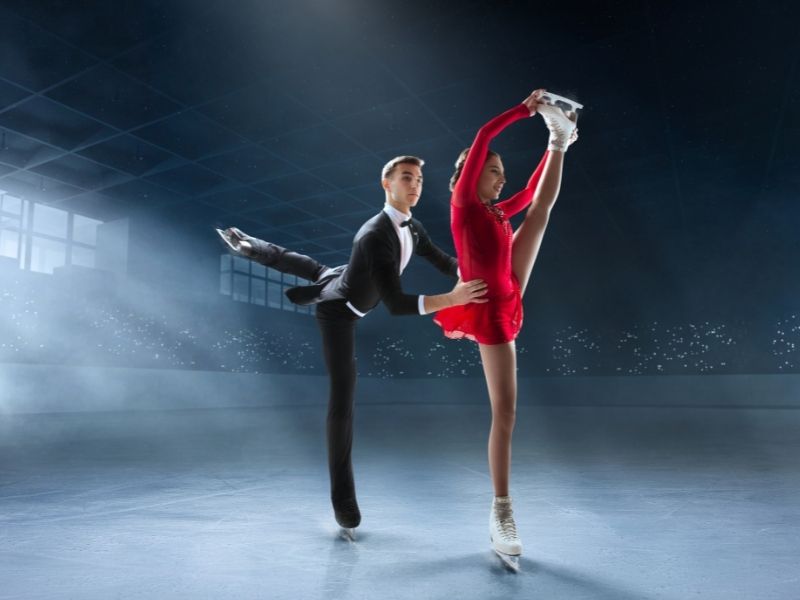 There are many types of dances, but one that is lesser known is ice dance.

Ice dance is a type of partner dance that is done on ice skates. The moves and music are similar to ballroom dancing except for the added difficult of being on ice skates.

It is a sport that is governed by the International Skating Union. Ice dancers perform choreographed routines to music, and are judged on their skating skills, footwork, and the synchronization of their movements with their partner.

Click here to read all the differences between figure skating and ice dancing. 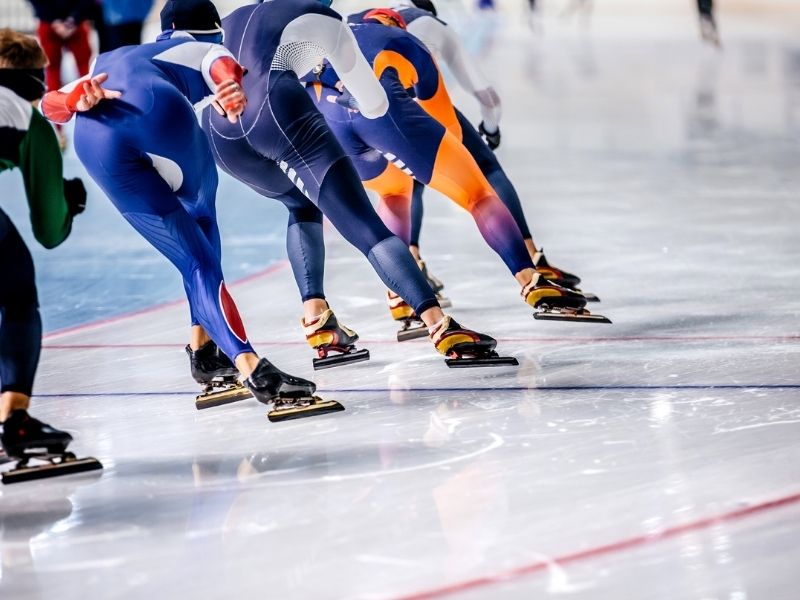 Speed skating is a sport in which athletes race each other on ice skates.

The races are typically held on a 400 m oval track, and the skaters must complete one or more laps around the track in order to win. Speed skating can be done in a variety of styles, including sprinting, long-distance racing, and relay racing.

Speed skating is a sport that has been around for centuries. It is a very fast and exciting sport to watch. There are many different types of speed skating, but all of them require great speed and agility. In the Olympics, there are several different speed skating events, all based on the different distance that the skaters will cover. 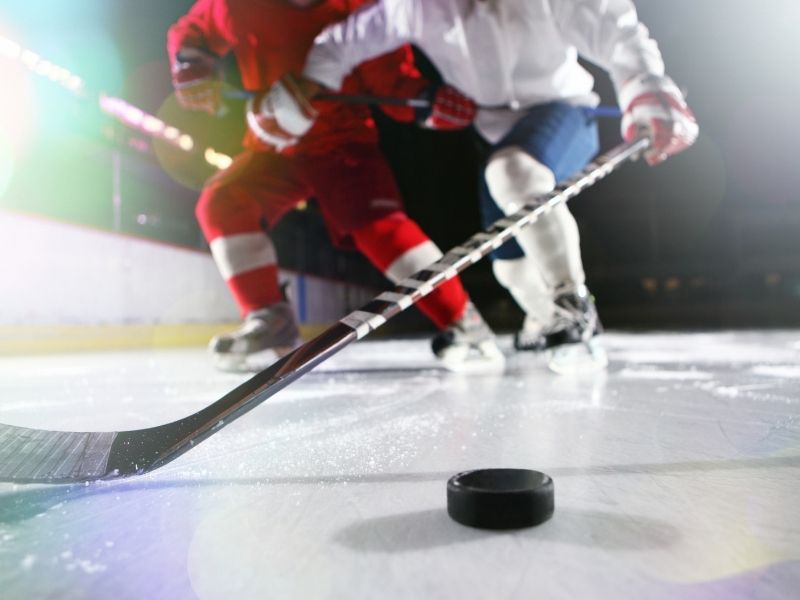 Ice hockey is a sport that is believed to have originated in northern Europe in the early 1800s.

The first recorded game of ice hockey was played in 1875 in Montreal, Quebec, Canada. Ice hockey is a fast-paced sport that is played on an ice rink. Two teams of skaters use sticks to hit a puck around the rink and into the opposing team’s net to score points.

The objective of the game is to score more goals than the other team. Players use sticks to hit a puck around the rink and try to get it past the goalie into the goal. Hockey is a physical sport and players can be penalized for hitting or holding opposing players too hard.

Hockey is a sport that is enjoyed by people of all ages and backgrounds. There are many different levels of hockey, from youth leagues to the National Hockey League. In the NHL, there are teams from all over North America, including Canada and the United States. Each team has its own history and fans that support them. The players in the NHL are also very talented and make for some exciting hockey games. 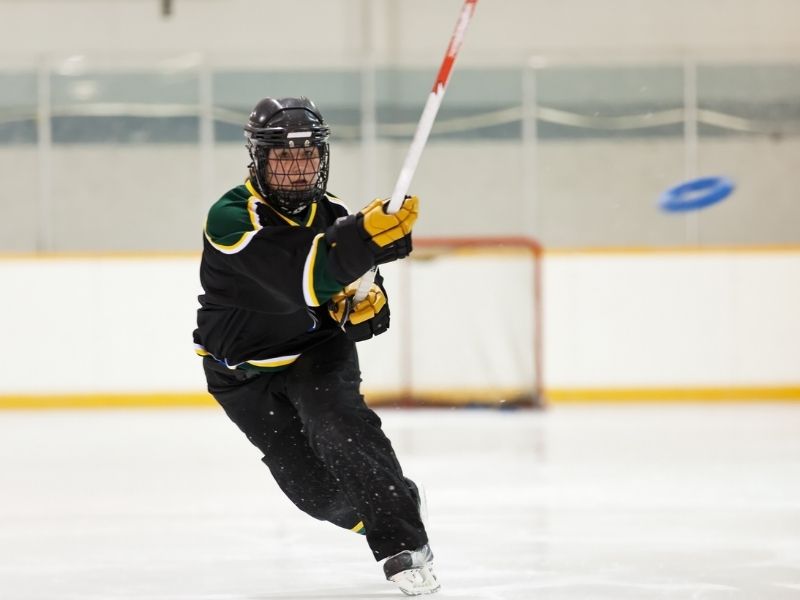 Ringette is a sport from 1963 that uses a ring and sticks on ice.

The object of the game is to score more goals than the opposing team. Ringette is a fast paced game with players of all ages, mainly in Canada.

It is traditionally a woman’s sport from a time when women did not participate in ice hockey. In recent years as hockey has become more popular with females, ringette has seen a decline in popularity. 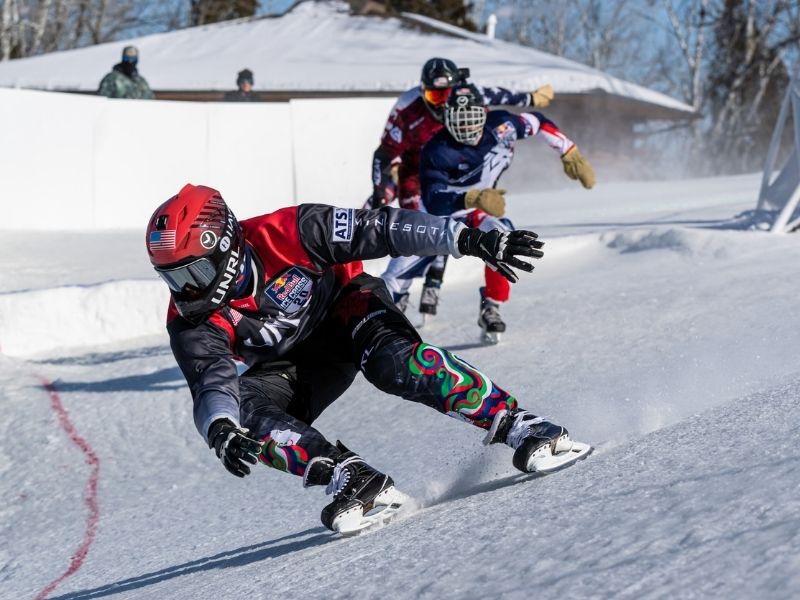 Ice Cross Downhill is a sport that is quickly gaining popularity. It is a downhill race that takes place on an ice track. Racers use skis and poles to navigate their way down the track as quickly as possible. The sport requires a lot of athleticism and skill, and can be quite dangerous.

Until 2019, ice cross downhill was known as Crashed Ice and was a popular extreme sport event run by the drink company Red Bull.

Many people who participate in ice cross downhill are hockey and ringette players.

There are a variety of ice sports that people can enjoy without having to worry about skating. These ice sports are all very popular in countries that have a long winter and they are gaining popularity as Olympic sports with both participants and viewers. 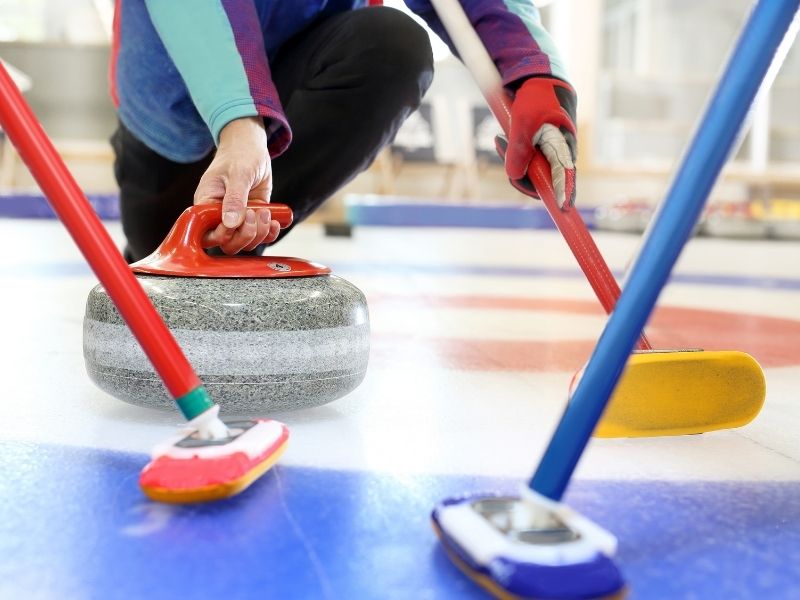 Curling is a sport that many people may not know much about but in many countries it is very popular.

It has actually been around for centuries.

It originated in Scotland in the 16th century. The game was played on frozen ponds and rivers, and the goal was to get a large stone as close to the center of a target as possible. Curling is thought to have gotten its name from the way the players “curled” their stones towards the target.

The game is played on a sheet of ice, and the objective is to slide stones towards a target. The stones are slid by teams of two players who use brooms to sweep the ice in front of the stone in order to help it move faster and farther. Curling can be a very strategic game, as teams attempt to place their stones in positions that will make it difficult for their opponents to knock them out of the scoring area. 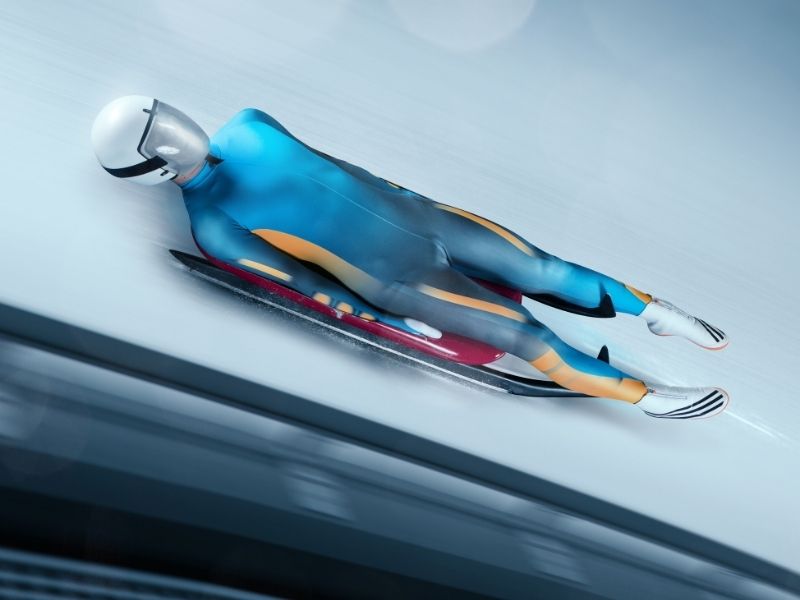 Luge is a winter sport that involves riding on a small, one-person sled down a steep and narrow track. The person goes feet first down the hill, unlike skeleton which in which they go head first.

The track typically has banking of up to 45 degrees and is coated with ice. Luge is one of the fastest sports in the world, with speeds of up to 130 kilometers per hour. 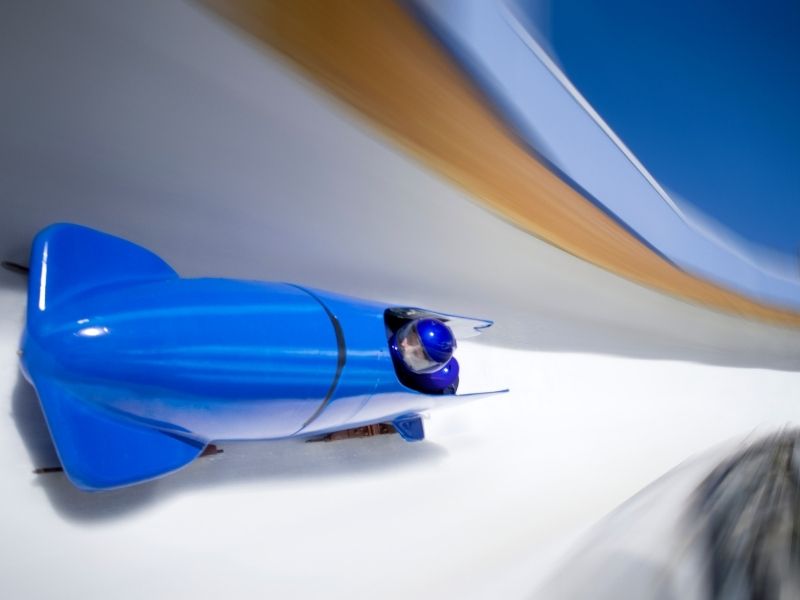 Bobsled is a sport that involves racing down a track in a small, four-person sled. The sport got its start in the early 1800s when people would ride down snow-covered hills on wooden sleds. The modern version of the sport began to take shape in the late 1800s, when people started using metal sleds and adding runners to the bottom to make them faster.

The movie Cool Runnings about a fictional Jamaican bobsled team who go to the Olympics was instrumental in putting bobsledding on the map of non-particpants. 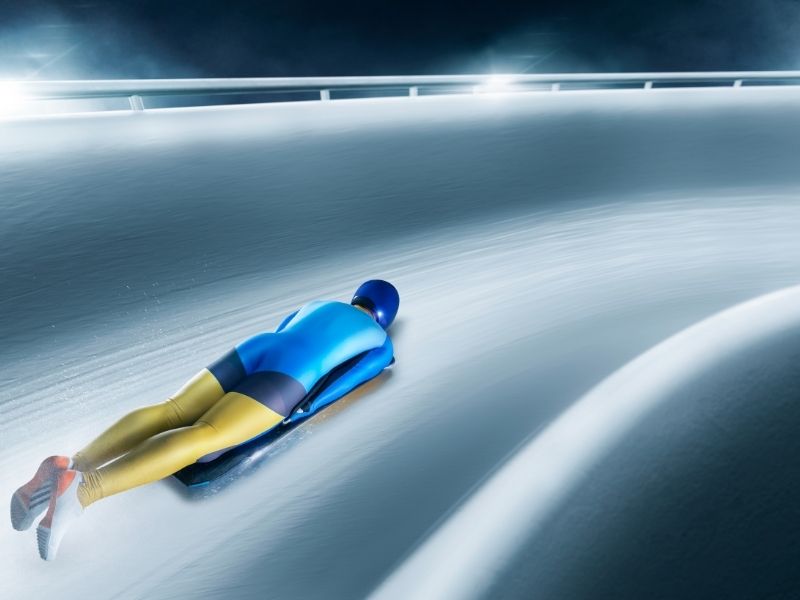 skeleton is a winter sport in which a person rides a small sled down a frozen track while lying face down. It is one of the three “winter” sliding sports, along with bobsleigh and luge

There are two types of skeleton: singles and doubles. In singles, the rider competes alone. In doubles, two riders compete together. Both disciplines take part in the Olympic games.

When most people think of winter sports, the first thing that comes to mind is usually skiing or snowboarding.

However, another great option to consider are the different types of ice skating.

Ice skating is a versatile and exciting sport enjoyed by people of all ages.

You can skate on an indoor rink or outdoors on a frozen lake or pond.

Ice skating can help improve your balance and coordination, as well as your strength and stamina. It is also a great way to get some exercise and have fun at the same time. If you are new to ice skating, there are classes available that can teach you the basics. 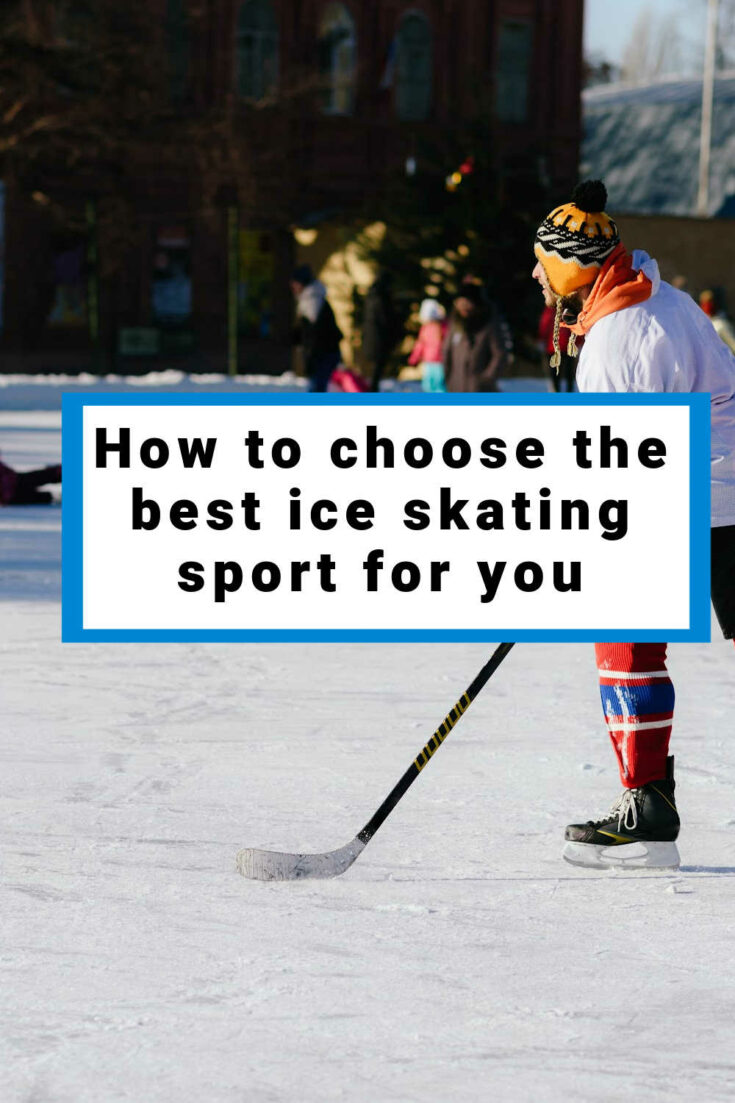