Ice dancing vs Figure skating is a common query amongst new skaters and it can seem tricky. Luckily, we have you covered in this in depth post.

If you enjoy watching ice skating on TV, you may have found yourself confused about the different disciplines of the sport. You may wonder what are the main differences between something like ice dancing and figure skating.

Ice skating started as a mode of transportation, but shifted into a beautiful artistic sport. Steel blades slice the ice as singles or pairs glide at high speeds and attempt daring leaps, sharp twists, and fluid graceful movements.

An untrained eye might struggle to find the difference between different forms of ice skating. To all, it appears fast, dangerous, and simultaneously beautiful. But the details will tell you whether you’re watching ice dancing vs. figure skating.

Below, we’ll let you know what ice dancing is and what figure skating is. Then we’ll break them down into 8 key differences so you won’t have to wonder which one you’re watching the next time you find yourself sucked into an eye-catching competition on TV!

Here’s what we will look at: 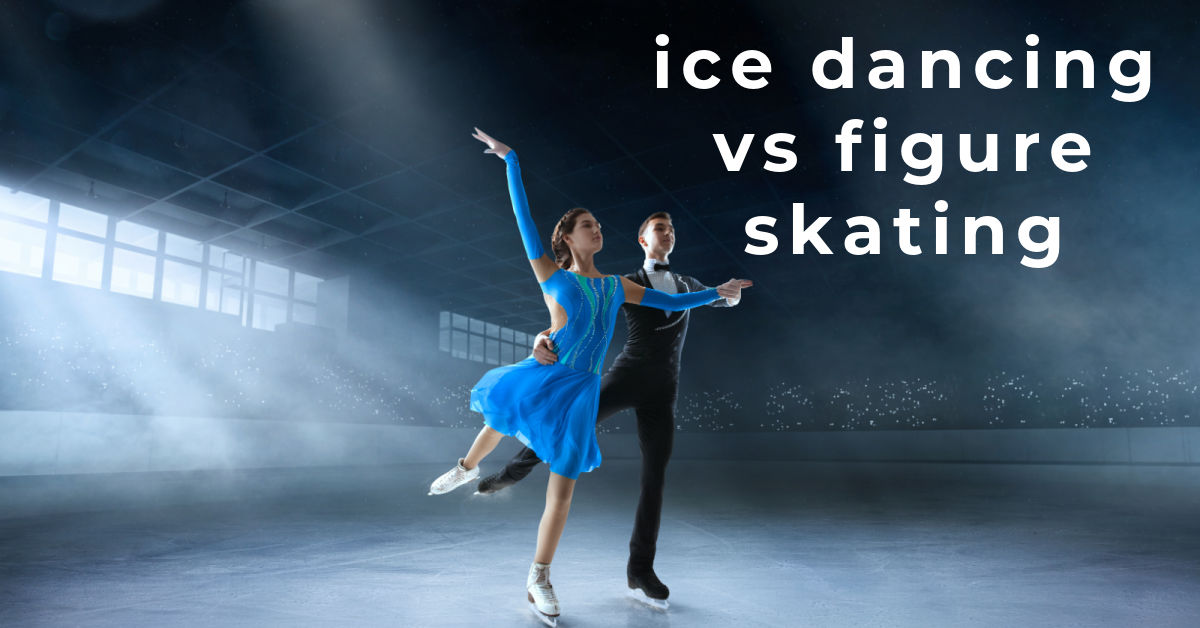 What is Figure Skating?

Figure skating is a more general term that refers to when singles or pairs perform on ice. Figure skaters execute various movements on the ice and in the air. The name itself, “figure skating”, comes from the patterns the skates make on the ice during a routine (as opposed to the randomized marks made in other forms of ice skating like ice hockey).

What is Ice Dancing? 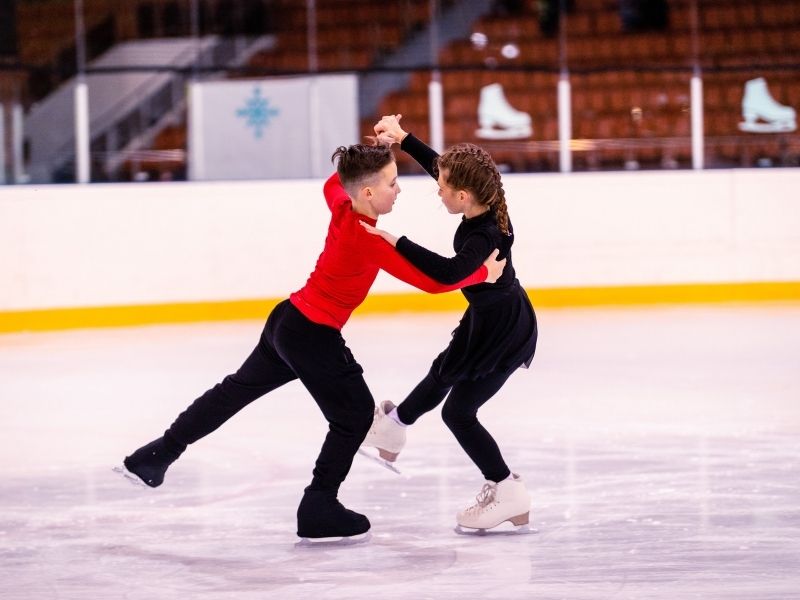 To the untrained eye, sometimes ice dancing can seem much easier than other forms of figure skating because there are fewer breathtaking jumps and awe-inspiring moves like the death spiral. However, the key to being a good ice dancer is attention to detail and perfecting the intricacies of each dance.

Think of it as ballroom dancing on ice. Here are the main differences between ice dancing and ice skating:

There is a big difference between ice dancing and figure skating. Ice dancing is all about movement and fluidity, while figure skating is more about precision and technique.

Well, in ice dancing, pairs aren’t allowed to do those kinds of moves. No throws or jumps. Some pairs will lift their partner, but rarely over their head and the lift is usually static (as opposed to lifting a partner and that partner being in motion).

This fundamental difference between dance style and acrobatic performance is the foundation from which the rest of the differences stem. So, let’s get to them!

Figure Skating: since figure skating includes more acrobatic movements, like lifts, jumps, and tosses, partners are usually drastically different in size. The male partner is taller and stronger, while the female is shorter and smaller.

Ice Dancing: since harmony and rhythm are what count here, and feet are mostly on the ground, partners are balanced, rarely differing in height and size.

Figure Skating: throws and leaps tend to require space and cover distance. As a result, partners are apart more often than partners in ice dancing.

The difference here is fairly straightforward. Think about it: when’s the last time you saw someone ballroom dancing without a partner?

Figure Skating: skaters can compete alone or in pairs.

Ice Dancers: pairs must consist of one male and one female partner.

Figure Skating: costumes are flashier, usually with sequin or sparkling details. Since figure skating involves a wider range of complex acrobatics, the outfits are better suited for range of motion. Men usually wear tight fitting shirts and trousers. Women wear shorter gowns that make it easier for them to maneuver and be maneuvered.

Ice Dancing: men typically wear clothes that are similar to what they would wear in a ballroom setting. Outfits are less flashy, usually allowing the feminine partner’s gown to stand out. The gown itself isn’t as sparkly as those worn in figure skating, but they are longer and allow for movement that accentuates the rhythm of the dance.

Ice Dancing: A shorter blade and shorter boot lends itself to more fluid motion. The shorter boot accommodates ankle motion when pointing toes, and a shorter blade allows for sharper turns – such as twizzles – that are more characteristic in ice dancing vs. figure skating.

Figure Skating: the focus is less on rhythm and dance and more on the complexity of what performers can accomplish. Music is almost a background element.

Ice Dancing: since skaters mostly remain on the ground, footwork and precision are more important here. Dancers in this category can choose music with vocals; an option not available to figure skaters. Since the performance is so heavily intertwined with the music itself, and the dance is supposed to be an interpretation of that music, lyrics add to the story dancers create.

A great example of interpretive ice dancing is Tessa Virtue and Scott Moir’s performance to the song “Stay” by Rihanna.

Both events have two components: the short program and the free skate. The short program usually lasts a little over 2 minutes and is the time when pairs or singles have to execute specified elements in their routine. This could be specific spins, lifts, step sequences, etc. The free skate is the time for competitors to show off, picking any movement or combination that best represents their skill level.

The difference here between ice dancing vs. figure skating goes back to our fundamental first distinction. In figure skating, movements will involve overhead lifts, jumps, and throws. In ice dancing, those moves are prohibited. Focus will be on elements like twizzles, pattern dances, and choreography.

Now we have run through the main differences between ice dancing and figure skating, let’s review some common questions: 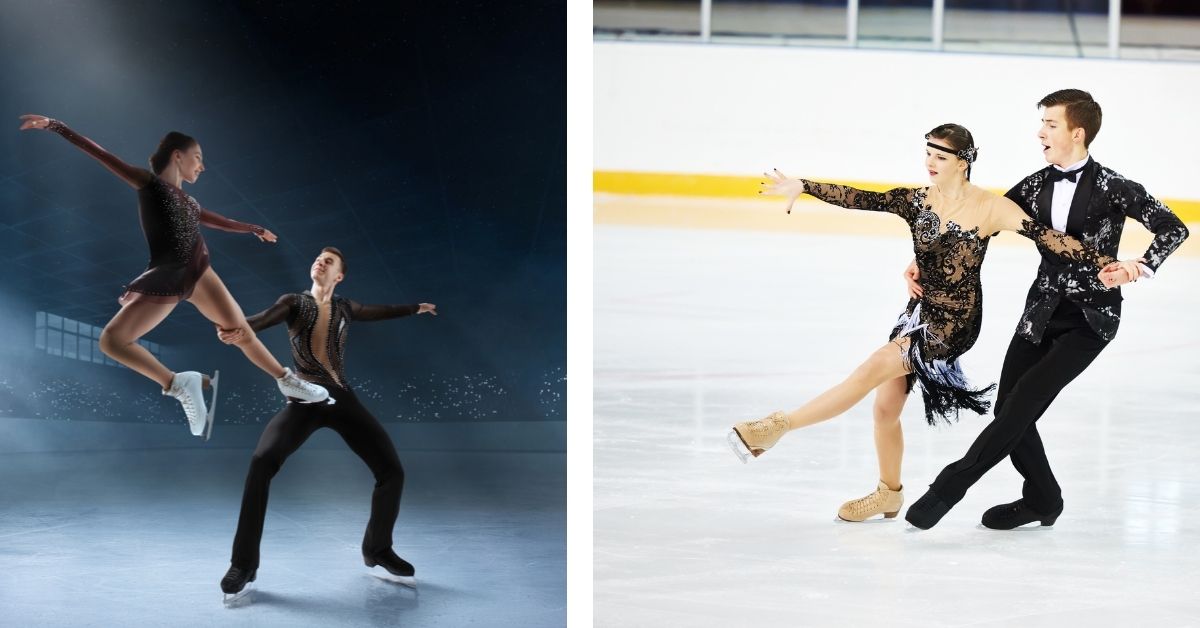 Lots of people get confused about these two disciplines as they both involve a male/female couple on the ice.

However, there are a number of difference which make these two branches of figure skating completely different.

When skaters are just starting out in ice dance, regular figure skates can be worn but at the elite levels, there is a difference.

The reason for dance blades to be shorter is because you skate with a partner. The short blade is less “because it’s good for footwork” and more “because you’re not so likely to trip each other while doing footwork really close to each other.”

Ice dancing blades also don’t tend to have much in the way of toe picks or spin rockers, because pair dancers don’t really tend to use either of those things. (Toe Picks are for jumps).

Ice Dancing vs Figure Skating: Why You Should Know the Difference

Ideally, knowing what to look for in each sport will allow you to appreciate the quality of each performance.

If you’ve seen jumps and throws in other performances, then you might have thought the ice dancing was simplistic. But now you know those acrobatic moves aren’t even allowed in ice dancing!

You can pay closer attention to footwork, musical interpretation, and the intricate choreography and appreciate an ice dance for the elements that make it good. On the other hand, the level of strength and ability required to pull off a figure skating performance can stand out to you more.

Plus, if you, your child, or a loved one are interested in figure skating, now you know the distinction between ice dancing vs. figure skating and can make an educated decision based on your particular interest! 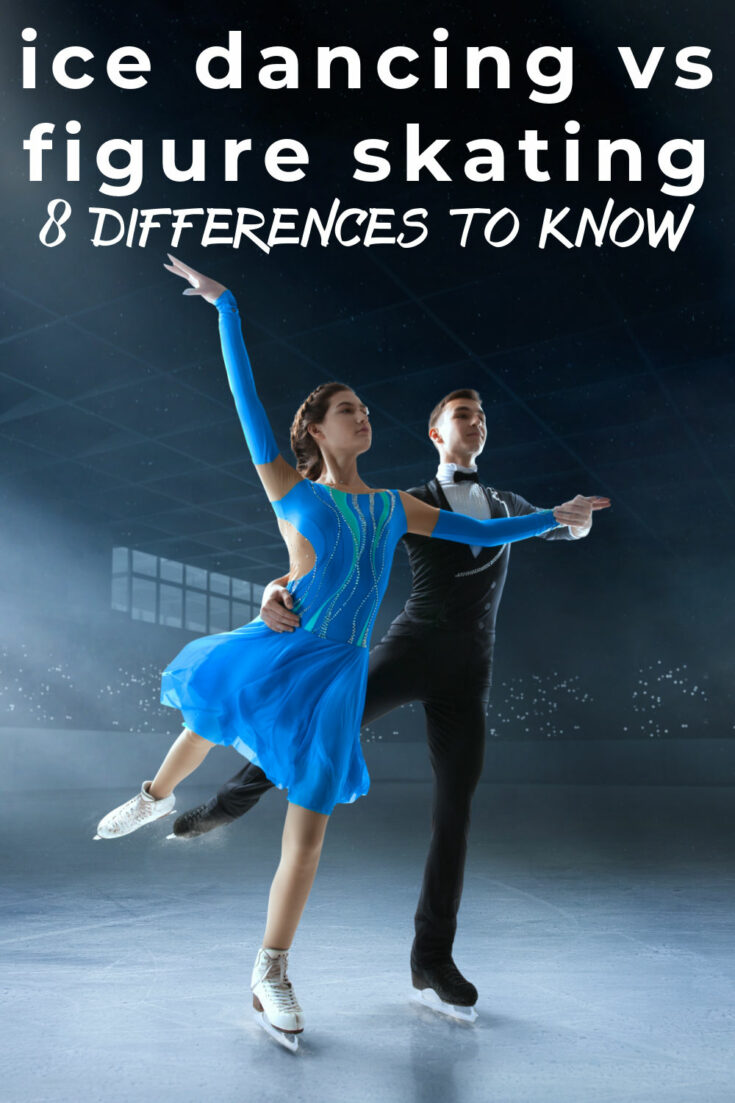